Writing and illustrating are two of the most enjoyable and rewarding pursuits anyone could imagine.  But the life of a freelance writer and illustrator can sometimes feel like a roller coaster ride with lots of bumps, thrills, twists and turns, and stomach lurching pitfalls.

I was making excellent progress with the finished illustrations for  A BED FOR LITTLE CUB.  However, these past two days have been a struggle at the drawing board.   Nothing seemed to be working.  And, even after all these years’ of experience, you’d think I know the minute I was starting to get off track and stop slogging away at a hopeless piece of art that was only spiraling down faster than my own emotions.

This happens sometimes.  It’s not exactly ‘writer’s block’ or ‘illustrator’s block’, it’s something else entirely.

Writers and artists tend to be emotional, reactionary people.   Most often we feel things intensely, a bit too intensely for our own good at times.   There is a great deal of turmoil going on in my life at the moment (hopefully soon to be resolved) and it makes it very difficult to create happy, carefree, warm fuzzy pictures when I just don’t feel that way. To make the situation worse, the sudden death/suicide of Robin Williams completely knocked me off track emotionally and artistically.

He truly was one of the most loved and admired brilliant comedians that ever walked this earth.   Robin is only two years older than I am.  When I was younger, in the 1970s, I really hadn’t seen him yet.  But, everywhere I went people would point at me and exclaim: “LOOK, it’s Robin Williams!”

Robin and I did look quite a bit alike.   We had the same 1970s longish thick hair, we both wore wild suspenders, and my wacky sense of humor onstage was often compared to his.   When I finally did see his stand up comedy routine I was stunned!   I thought: “This man has watched ME onstage and has stolen my entire persona and humor!”

So, lo and behold, my own special close affinity to this wonderful man began.  Simply because we looked and acted somewhat alike.   I always felt reassured and hopeful for the world because Robin was in it. And he was doing his part to make the world laugh at itself, poke fun at the most impossible situations, and just keep going even in the face of the darkest adversity.

Robin’s death threw me into my own depths of despair (as Anne Shirley would say).   We all have our demons, and I have some of the worst you might imagine.   I’m usually pretty good at keeping them under lock and key in the deepest catacombs of my psyche.  But every now and then I can hear them rumbling and grumbling and trying their best to nudge that locked door open.

If Robin could succumb to his demons and depression what hope is there for people like me in keeping my/our own locked safely away so that they can’t do us any harm?

I am happy to report that I am feeling much better tonight and work in the studio is going along much more smoothly.  I have two lost days of work to make up, but I think I can do it.   When I’m on a roll drawing and painting goes smoothly and quickly for me.  The sketches are done, the layouts have been worked out, and it really is only a matter of cutting the watercolour paper, penciling in the crop marks, and transferring the sketch to the paper and make corrections as I go.

Part of my despondency has to do with the bleak weather we’ve been having and not going for a long hike every day with the pups.   These long hikes do as much good for me as it does for them.   This afternoon was beautiful!  The pups and I took a nice hike down to the river and visited with a friend who has a house right on the river.   The pups love his grassy, mowed area that leads to the river stone edge of the river.   It was probably the best two hour break I could have taken.

Note to self:  Even when it’s a bit dark and dank get out and go for a walk with the pups to clear your head!

It really does wonders for the creative psyche.

I often forget these little tricks to keeping myself sane and on track in the studio.  I tend to stay chained to the drawing board for large inhumane chunks of time trying to convince myself that if I just keep drawing and painting magic will happen.

Writers and illustrators and artists do need to take a mental and physical break from the intense concentrated work on the drawing board or on a piece a paper or on the computer screen.

If anyone asked me what would be the best advice I could give someone who was struggling with writer’s block or illustrator’s block or simply got off track, that advice would be, TAKE A BREAK!  Go for a walk, listen to the birds, smell the hint of crisp autumn air hovering on the edge of the tail end of summer.

I hope this confession about getting off track offers hope and encouragement to other writers and illustrators who might struggle with this problem.  Struggle with doubt.  Struggle with financial worries.  Or just feel stuck.  It really is fairly simple to get unstuck.  Take a break.  Ease up on yourself.  Breathe.  And snuggle the pups. 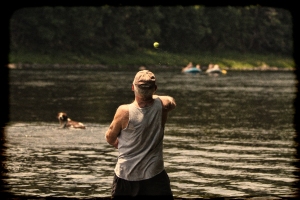