Whew!   Every time I do the finished artwork for a book I reach the point where 1) I really start hating the book and characters and 2) it seems like I’ll never get the layouts finished and the final artwork done done done!

ALL the layouts are finished for A BED FOR LITTLE CUB and I really do like them!  (after hating them for a while).  Now that I see each picture for what it is and how they all fit together as a whole I would have to say that I am pleased.

I am now eager to get the painting finished.  I think I’ll have them all done within 8-10 days.  The only layout/illustration I haven’t given any thought to is the cover illustration.  I always do this last after all the interior illustrations are finished so that I can see what kind of picture would sum up the entire story in one glance AND make people want to pick up the book and look through it!

I did a very quick 15 minute value study for the very last picture in the book.   Sometimes doing a value study helps me see (and solve) problems that I might now have noticed before. 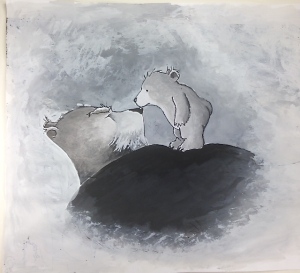 I also love the layout sketch for the page where Little Cub is describing to Old Bear exactly what kind of bed he wants. 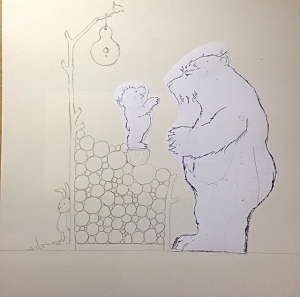 I love the idea of having Little Cub standing on the wood pile so that he can be closer to Old Bear’s face.   The empty space at the lower left needed an animal of some sort to balance out the composition.  I tried putting a rabbit there in a realistic rabbit position, but then changed my mind.   My thought was “If the bears can stand and talk why can’t other animals?”   So, I drew the rabbit as you see him.

I love it!  The problem is…the rabbit adds TOO much information to the scene that really isn’t part of the story.   Here’s a good example as to how a picture really can have too much information or add information that detracts from the main scene.  As much as I love this rabbit he will NOT be in the finished illustration.

BUT…because I love the picture and the idea so much I will most likely develop an entire book around THAT rabbit!

One of the things I always do in the writing workshops that I taught was to show the writers a photograph or a picture and have them write their version as to what is going on in the scene.

With this rabbit I immediately want to know 1) why is he hiding as if there are gangsters after him?  Why is he eavesdropping on Little Cub’s and Old Bear’s conversation?  Why is the wren perched above the gourd bird house?  Did the rabbit steal her eggs?  Is Little Cub telling all that he knows?  Was Little Cub blamed for the rabbit’s actions???

These questions always lead to a good story line.

I’m in the final stretch in finishing the art for this book.   I’ll breathe a huge sigh of relief once it is out of the studio.   Most likely I’ll drive the finished art down to my editor in NYC.   This will give me a chance to go through the finished artwork with her and the art director, maybe have lunch, and then spend a few hours walking around the city.