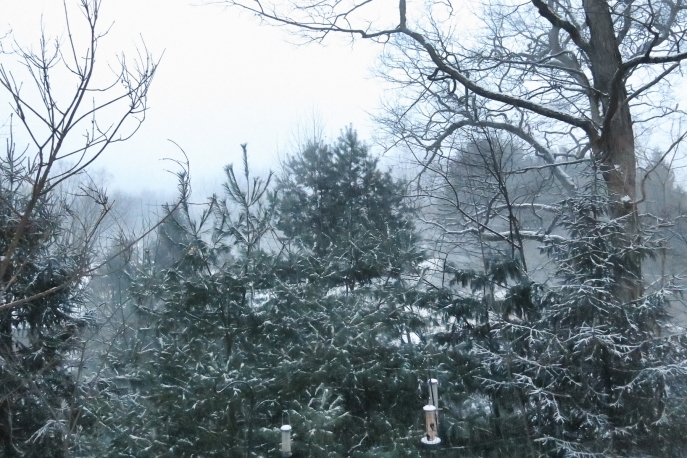 CHRISTMASES PAST: Over coffee this afternoon Ed and I reflected on our Christmases over the past 40 years. Some of the happiest, we both agreed, were those when we were flat broke, had no money, no food, nothing at all. Those were the years we did our best to make certain no one knew how little we had.

During those lean years we had to be very creative with gifts to give to friends and family.  We took blocks of scrap wood from Ed’s workshop in the basement and scraps of fabric that I had saved for quilting projects and made sets of Christmas tree ornaments to give as gifts. We covered the blocks of wood in glue and “wrapped” them in fabric to look like presents. Luckily, I always hoard bits of ribbons and odds and ends that we wrapped around the blocks of wood. We gave these as gifts, in sets of three, and were thankful we had creativity to offer.
Another year we ransacked my fabric boxes (I had been a costume designer in the theatre) and spent a frenzied week sewing and quilting potholders to give as gifts. One friend thought they were so artistic that he refused to use them and instead had them framed as art! They still hang on his walls to this day.
And, of course, being so broke we had no money to buy gifts to put under the tree so, again, we turned to theatrical illusion. We wrapped empty boxes in whatever wrapping paper and fabric we could find and put those under the tree. I don’t think anyone ever caught on that we had nothing but our own company and our dogs. And we were happy.
During those lean years one of my mother’s neighbors, an older German woman who had been interned in a concentration camp, always made a huge assortment of Christmas cookies. She always put a big box together for us. I think she somehow knew we didn’t have a great deal in our house to eat and she made certain we had Christmas cookies.
Looking back at how little we had and how many years we literally had very little food, Ed and I agreed that we never felt unhappy. We look back at laugh at what I call our “poverty bread” years when all we basically had to eat was a mixture of flour, water, salt and a bit of baking soda from which I made an unleavened bread. One year we ate that bread for almost the entire year and very little else. We used to keep bacon grease in the ice box for cooking purposes, but  that year it was what we smeared on the bread (thinly) for us and the dogs to have a bit of protein and flavor.

I never worry about the Great Recession because I know we have survival skills and know how little food it takes to survive. The one thing we did have was imagination and creativity and it was enough. And the unconditional love of our dogs who never held it against us that we were so broke and had so little to give them.

So, this Christmas, as I gleefully buy gifts for the pups and John and Ed I’m thankful that I am able to do it.  And I don’t feel guilty.   When you scrape by for so many years, believe me, you really do relish the “fat” years!

And, yes, we still have all the handmade ornaments and hang them on the tree as a reminder that Christmas really is what you make of it.  Funny how memories come flooding back during the holidays.