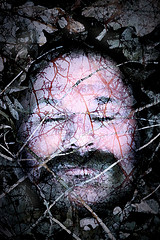 The bare trees huddled close to the wooden house as if to warm themselves from the cheery glow coming from the kitchen window.

Sitting in the kitchen the man stared out the window, thinking.

A fly softly buzzed against the glass seeking its own freedom from his thoughts.

The man picked up his mug of coffee and sipped it without taking his eyes off the trees standing stark against the steely sky.

The world was hushed and silent as if waiting for something to change.

Something to alter his reality.

Something to make his reality not be.

On the kitchen table sat a small plant.

As if unaware of the shift in reality the primrose bloomed bright with yellow flowers. Cheerful and calming as all primroses are.

The fly grew bored of buzzing against the glass and settled on the leaves of the primrose exploring the surface hopefully.

I am the eternal optimist, the man thought.

Or is it hope springs eternal?

How could this moment be his reality?

The eternal question everyone asks at one point or another in his life. How and why. What had he done wrong?

It had to be a trick.

A trick of the machines.

A trick of the light.

A trick of his hearing.

He must have heard wrong. That had to be the answer.

What had Gertrude Stein said before they wheeled her into surgery?

What is the answer?

And when no one answered she said the most oft repeated line of her career: “In that case, what is the question?”

What is the question?

The man had no answers.

Just the silent reality of the warm kitchen.

The man stood and pressed his forehead against the cold glass that kept the outside world at arm’s length.

He put his hand in his pocket and fingered the bone button that he always carried for good luck.

The button had failed to bring him the good luck he needed most a few hours ago.

The man took the button from his pocket and held it between his thumb and forefinger.

The smooth texture brought back a flood of memories.

A night in an ancient burial mound.

The discovery of his first skeleton lying on its side, undisturbed.     Unaware.

His reality was that he was too aware.

Outside, the bare trees shuddered in the wind and scratched at the window with their bony branches.

The sound brought back memories that would haunt him for the rest of his life.

It would be a brief haunting he thought.

It made no sense.

Reality made no sense.

He had too much to do.

Too many things to finish.

The fly buzzed back to the window. Desperate to get out, not be trapped in this man’s reality.

But, what was his reality?

His reality was one month.

One month to tie up the loose ends of his life.

The man’s gaze settled on the primrose and he smiled.

How could something so humble bring so much joy?

It was the same with the bone button he always carried in his pocket.

It brought him peace of mind and held all the memories of his life.

The button made him remember.

The button made him forget.

The diagnosis made him regret.

Outside the kitchen window the bare trees stood still holding their breath.