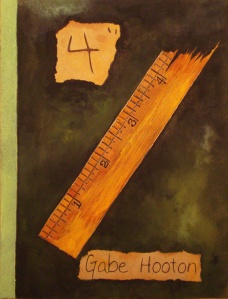 Several years ago I wrote an edgy, coming-of-age novel titled 4″ and published it under one of my pen names—-Gabe Hooton.  This autobiographical novel is based directly on one of my journals that I wrote when I was 17 years old.  4″ is the first in a trilogy: 4″, 8″, and 12″.  The three books cover exactly one year in the life of seventeen year Gabe Hooton after a near deadly automobile accident.  Four inches is the connecting thread of the narrative of the story.

This one year proves to be filled with life changing insights, traveling to Paris, and finding a place for himself in his world.

I don’t know why but I looked up the book on Amazon this evening.  You can imagine my surprise and pleasure when I read the following two reviews from total strangers.  Sometimes it takes an objective eye to really make sense of someone’s words.

A review from a reader on Amazon:

Gabe Hooten experiences great physical trauma in an automobile accident, as he exhaustedly wends his way home from a marathon drive to visit his grandmother in Virginia. The way home, detoured by his recovery, is longer than he expected it to be, and he takes us through the winding roads with him, on his way to his REAL home–to college, to Paris, to writing, and to love.

When one is told that this is a “coming of age” tale of a young gay man, one would think that it is full of angst and soul searching and heartbreak as he “discovers” being gay, and coming out, and dealing with the surrounding drama of such a thing. But the charming thing about Gabe is that his being gay is the very LEAST of his worries–it seems that he is BORN knowing, that he never considered this anything but what he is. Oh, he’s angsty and insecure, but his real worries are about being smart enough, sophisticated enough…GOOD enough. Being gay has little to do with it. His driving passion is to be a writer–to be intelligent enough and successful enough at life to be able to live his dream. And while he wrestles with his crush on the aloof and elusive object of his desire, what drives him is the pursuit of that dream. Being gay is just what he IS, and he has no doubts about it, no desire to change it, no drama surrounding the “being different” of this particular aspect of his person. “Being different” involves growing up in a down-home family that falls short of the sophisticated life he dreams of. “Being different” involves being smarter than anyone around him, and yet wondering if he’s actually smart ENOUGH, because the bar is set so low among his peers that he can’t help but jump it with ease. “Being different” involves being short, and longing for just that four inches….

This book is painful at times, hilarious at times (Gabe’s love/hate relationship with chickens, which anyone who knows chickens knows is true to the bone), always charming, always whimsical, always optimistic, always enthusiastic and always TRUE. It is a glorious tale of a very unusual young man, one that you can’t help but love. And when one learns what actually pushed him to make that fateful drive to Virginia, what was so important for him to accomplish that it drove him to exhaust himself behind the wheel and cause that terrible accident, you will know why you love him, because it is impossible NOT to love such a loving heart.

If I had more than two thumbs, then they all would be up. Bravo, Gabe–please tell us more!

Another review from a reader on Amazon:

I must say I am not a fan of e-books. I read the first few pages of 4″ and I was sucked right into Kindleville. This is a very well written book that keeps your interest from start to finish. I enjoyed it very much.
I do hope there will be more books in the series.

These two readers have no idea the hope and encouragement they have given me to go ahead and finish writing the trilogy.  Once a writer puts his words out into the universe he rarely knows who reads them and how readers react.  Thanks to Amazon it is now to get a bit of insight into how readers respond to the words written from the heart.